“We have to keep dreaming”, says Jagland about the EU

In an interview to Estado, the president of the Nobel Peace Prize Committee says to believe Prize to generate debate 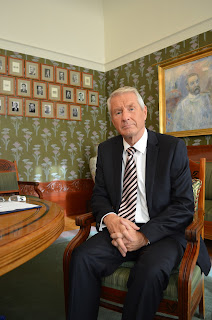 OSLO - In a decision that came to many as a surprise, the European Union (EU) was announced as the winner of the Nobel Peace Prize. The most surprised of all were Norwegians themselves. In the country, which hosts the annual announcement of the award, 80% of the population rejects the possibility of joining the EU.

The main reasons for the decision to grant the prize to the organization were its historic achievements in terms of "reconciliation and peace, human rights and democracy in Europe." "Since the end of World War II, France and Germany never went to war again", read Thorbjorn Jagland, chairman of the Nobel Committee for Peace, out of the official statement. The confirmation of EU’s full membership to Croatia from July 2013 and negotiations involving the entry of Serbia and Montenegro in the block permeated the speech: "This peace process, which also entails the fall of the Berlin Wall in 1989, is expanding now to the Balkans", Mr. Jagland stressed.

The economic crisis in Europe, a recurring theme in recent news coverage of the region, was cited only once. "We are focusing on achievements in terms of democracy and human rights," Jagland said. He said the financial issue and the euro "are not our focus."

Jagland, 62, has been prime minister (1996-1997) and minister of foreign affairs (2000-2001) of Norway. In 2009, after four years as President of the Norwegian Parliament, he is now chairing the Committee of the Nobel Peace Prize in Norway. An old advocate of the European project and of the Norwegian entry in the EU, Jagland wrote in 1990 the book "My European dream." When asked if his dream was fulfilled with the Nobel Peace Prize or if it still remains a dream, he replied: "It's an ongoing process. We all need to keep dreaming." Read the following excerpts from the interview he gave on Friday to Estado in Oslo.

Estado: Brazil was never awarded the Nobel Peace Prize, but the award is intended to recognize those who contribute to the world peace. How do you think this award will resonate in Brazil?
Thorbjorn Jagland: I don’t know, I don’t know. I think it is important to understand the story behind the award. We had 60 years of peace in Europe, something we never had before. There was rather a process of continual peace, where wars between countries, like France and Germany, did not occur. In the Balkans, it has passed more than a decade now since conflicts have come to a halt.

Estado: But do you think that Brazil will one day have an award?
Thorbjorn Jagland: I hope so, but we do not distribute the prize by geographic regions.

Estado: What impact do you expect for today’s announcement?
Thorbjorn Jagland: There will be much debate, especially in Norway. Many people will like it, some will not like it. But the important thing is the message that the EU can not disintegrate if we consider its own history.

Estado: 80% of Norwegians are against an eventual entry of Norway in the EU. What does this have to do with the announcement of the prize here in Oslo?
Thorbjorn Jagland: It has nothing to do with it. Our concern is with the peace process in the continent. 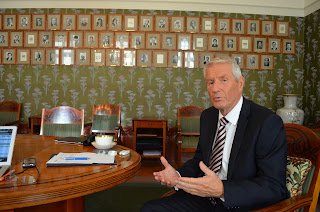 Estado: Having awarded the prize for the EU and not for a person who has contributed to the peace process is not rather a result of a lack of prominent leaders in the continent today, especially in this time of crisis?
Thorbjorn Jagland: We've given the Nobel Peace Prize twice for the UN, for example. It s not a surprise to give the award to an organization. We gave the prize to the European Union because it would be difficult to find a single person responsible for what happened, and we value the institutions.

Estado: You wrote the book "My European dream." The announcement of the Nobel Prize fulfills your dream or will you still be dreaming?
Thorbjorn Jagland: (Laughs) It's an ongoing process. We need to keep dreaming.

Estado: Did you know that the winner of the award was leaked to the media 40 minutes before the announcement?
Thorbjorn Jagland: I heard about it.

Estado: How did that happen?
Thorbjorn Jagland: The entire process occurs behind closed doors, inside this room (pointing around and at the table where we are sitting). Nothing should leak.

Estado: But it did leak.
Thorbjorn Jagland: In the last hours the Norwegian government needs to be informed about the winner, and then the process increases in size as not previously seen, when it's just us in the room of the Committee. Unfortunately, sometimes information ends up leaking.

Estado: And those who always leak it are from the Norwegian press...
Thorbjorn Jagland: (Nods silently and heads for the photo section).

Weblink to the original in Portuguese: http://www.estadao.com.br/noticias/internacional,precisamos-continuar-sonhando-diz-jagland-sobre-uniao-europeia,944658,0.htm